50 years ago, I heard Dr. Martin Luther King, Jr., give his last public Sunday sermon at the National Cathedral. 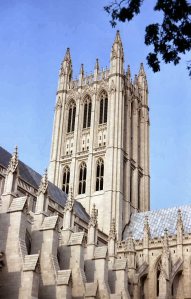 In 1968 I was a brand new Air Force second lieutenant living in Washington DC.   I had only been there about a month when a friend suggested that we go hear Dr. Martin Luther King, Jr., preach a Sunday sermon at the National Cathedral.  On Sunday, March 31, 1968, my friend and I, along with a crowd about 4,000 people, went to the Cathedral to hear him speak.   It was an amazing thing to be there.  In that much simpler time, anyone could show up at an event, walk in, and hear a famous American speak.

Dr. King was well known to me for his 1963 “I have a Dream” speech and to be able see him in person and hear him speak was an event not to be missed.  From our seats, Dr. King was a small figure being led up to the Cathedral’s high pulpit, but when he began to speak, there was no mistaking that voice.   Yet after 1963 much had changed in the country.  In the wake of the Kennedy assassination, the country had experienced continual upheaval.    Although President Lyndon Johnson had promised “A Great Society” the escalation of the war had drained money that might have helped the poor.  Between 1964 and 1968, civil disturbances resulted in large numbers of injuries, deaths, and arrests, as well as considerable property damage, in predominantly black areas.

During his remarks in the Cathedral, Dr. King stated to bring attention to this situation, he would bring 3000 poor people to Washington that summer for a nonviolent “Poor People’s Campaign.”  Further, he added that if nothing were done to raise people’s hope, the summer of 1968 would be worse than previous years.  The U.S., he said, spent more than $50,000 to defeat one Vietcong soldier, while spending only $53 for every poor person in this country.  Dr. King knew that poverty could not be successfully dealt with without ending the war.  These twin issues dominated the news and it was not surprising to hear Dr. King link them in this manner.  We left the Cathedral with much to think about.

The following week began well for me.   I was finally going to get a car, after 6 weeks of walking to work and using public transportation in Washington.  I mention the car because that was where I learned of Dr. King’s death on April 4, 1968.  It was late in the day and I was returning from my car dealer in Arlington.   I drove home from Virginia on I-395 which crosses the Potomac near the Pentagon and heads east near the U.S. Capitol.   Then I began to notice smoke on the northern periphery of the city, beyond the Federal area.  I turned on the radio and heard that Dr. King had been killed in Memphis.  I was stunned.   As I approached my exit, I craned my head north to see what was happening and it seemed like a large section of Washington was on fire.

Things quickly spiraled out of control:   huge crowds (some estimated over 20,000) overwhelmed the small DC police force.  President Johnson then ordered nearly 15,000 federal and National Guard troops to restore order in the city.  By the time the calm was restored on Sunday, April 8, some 1,200 buildings had been burned, including over 900 stores.  I had good friends who had owned a store in the riot area.   It had served a neighborhood clientele who had come to rely on it.  Now it was gone.  The owners never re-opened the business.

The restoration of order in Washington seemed to finally bring a moment of calm.   Yet, if there was calm  now, many, many storms were to follow.   1968 was a tough year.

In April we couldn’t begin to realize how tough it would be.

A slightly longer version of this story appeared in the Geneva NY Finger Lakes Times on April 1, 2018 to commemorate the passing of Dr. King.