My Mother and the Turkey — A Thanksgiving Fable 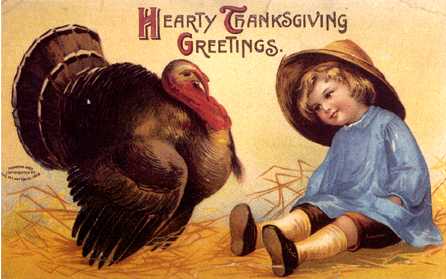 My mother wrote the following story many years ago:

“When I was young, our neighbor came home with a parcel of turkeys and chickens. Since there wasn’t much traffic on our road, he let them run wild.   This was not unusual as most farm chickens and other poultry were loose in those days.    And it would have been of little consequence to me except I had to walk to school and back, which took me by the neighbor’s farm.   My parents thought that I had asthma and that walking to school would strengthen my lungs.  I was short and pudgy and my mother believed that it was necessary to keep me warm, so I was bundled up to the Nth degree.

Well, most of all the turkeys were killed or disappeared.  However, one didn’t die.  He was a skinny tom with spurs, which to my childhood mind seemed at least two feet long.   This turkey for some reason hated me!  And he was a killer!!!

Dad said, “it was all in my mind,” and if I stood still he wouldn’t bother me. My father’s principle was that if you sat still nothing would harm you. Mother was always getting stung by bees, Dad said, “If you sit still and don’t move they won’t sting.” Famous last words.

Well, in the case of the turkey this didn’t make a difference

If I stood still he flew over me.  When I ran he hit me with his spurs. With my little legs I couldn’t get very far without him swooping down on me.  It was about 2 miles from our one room school back to the farm.  That turkey could be way up the tree and in the field and when he saw me coming, he headed for me as fast as he could. He’d only chase me as far as the chestnut tree and he wait for me hiding by the chestnut tree. I tried every ruse I could think of, but even if I went way around that turkey would get me.

Of course all the local kids got a big kick out of this.   They waited on the hill near our house for me to come along.  I am not sure if they rooted for me or the turkey.  But to them it was great fun.  To me, it was “not funny” as Molly used to say to Fibber Magee on the radio.

They laughed and laughed as I tried to evade my tormentor.   It was mostly a draw with the turkey clearly on top in most of the contests. This went on all fall.

Finally Thanksgiving came, and unknown to me Dad bought the turkey.   He didn’t say it was my Tom, but I knew it was that turkey and I wouldn’t eat it. To this day I eat turkey, but I don’t like it.” 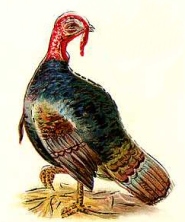 To her last days my mother was convinced that the Tom was out to get her.

John E. Norvell is a retired Air Force Lt Colonel, decorated air combat veteran of the Vietnam War, and former Assistant Professor of American and Military History at the U.S. Air Force Academy. He has written freelance for the Washington Post, the Middle Tennessee Journal of Genealogy and History, and for several newspapers around the country.
View all posts by jenorv →
This entry was posted in American History, American holidays, Norvell Family History, NY, NY History, Thanksgiving and tagged Fibber Magee, Thanksiving, Turkey. Bookmark the permalink.