Thank you for your Service

“Thank you for your service.”

It’s a comment I hear with some frequency these days. When I served from 1966-1989, no one ever said that to me. In fact most of us who served in the Vietnam era were never thanked; yet those who served after Desert Storm and in the ongoing Afghan and Iraq theaters most likely were thanked. It’s an odd thing to think about: we all served our nation, many put their lives in danger, yet many were shunned while others were thanked.

If one could pinpoint the phrase’s emergence, it would be in primarily the last 20 years. One factor that changed the attitudes may be Tom Brokaw’s 1998 work, The Greatest Generation. His book lauded the men and women of the WWII era. These Americans survived the Great Depression, helped win WWII, and built a stronger post war world. The book seemed to touch a national nerve. It helped revive feelings that were dormant during the post-Vietnam period but had formed the strong support for America’s military in the past. Brokaw, then, tapped into our strong national pride and respect for our citizen soldier.

In our early history, rather than having a professional standing army which the founders feared, the United States relied upon its citizen soldiers to do their duty when needed. After their time in service, these men and woman returned home, put down their arms, and rejoined their communities as if nothing had happened. This is the model that worked well until Vietnam. 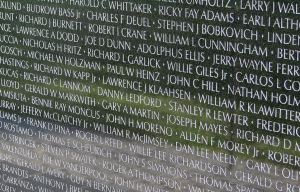 That war tore up the social contract and ripped the country apart. Americans who served were cast as the villains (rather than the politicians who actually ran and micro managed the war). World War II was considered a “good war,” but Korea and Vietnam were viewed as failures. Desert Storm fulfilled the need for an American victory in combat and helped to shift the national mood toward veterans. In turn Brokaw built on this feeling and helped heal the breach between those who did not serve and those who had by showing that those who served were neighbors, family and friends who did their duty: ordinary Americans who rose to the challenge.

“Thank you for your service.”

It would seem to be a simple thing to say and one that most veterans would welcome. But like many veteran issues even this phrase can be complicated. There are several veterans face book groups and periodically this subject is raised. Some folks feel humbled. Some are embarrassed. Many feel it is awkward to be approached and put on the spot. It’s not that this recognition isn’t appreciated: it is.

Most who served have no regrets; they feel that they did their duty in an honorable manner when so many have not. Most vets do not see their time in uniform as heroic. Some well-wishers try to engage them in further conversation, which many find difficult. Questions like: where did you serve or did you engage in combat can be problematic and trigger complex memories and reactions. It is hard, for many to discuss their service with people they do not know. They are not close friends. They ask that others please respect that fact.

To engage veterans, then, become involved with groups such as the African American PTSD Association, Wounded Warriors, Honor Flight, VFW , USO, American Legion, American Red Cross, etc. which all need volunteers. A complete listing of opportunities can be found on the VA website (https://www.va.gov/vso/VSO-Directory.pdf ) There are many ways to help. 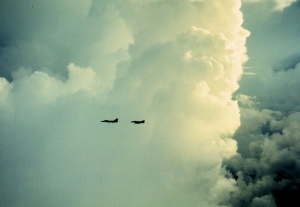 Also, take some time to learn about our military and what veterans have endured during their service. Some studies state that less than 1 percent of all Americans today have any ties to the military or veterans. Soldiers give up much to serve: enduring isolation, hardships and separation from family, and of course possible death. Most Americans do not know that almost every person who served in Vietnam was exposed to Agent Orange. It is a terrible chemical and significant health issue for many. Learning about these issues will break down the barriers between those who served and those who did not.

So what should one do when encountering a veteran?

If they self-identify with a hat or patch on a jacket – say “Thank you for your service.”

No more no less.

A version of this post, appeared as an OpEd in the Finger Lakes Times, Geneva NY, Sunday November 10, 2019

John E. Norvell is a retired Air Force Lt Colonel, decorated air combat veteran of the Vietnam War, and former Assistant Professor of American and Military History at the U.S. Air Force Academy. He has written freelance for the Washington Post, the Middle Tennessee Journal of Genealogy and History, and for several newspapers around the country.
View all posts by jenorv →
This entry was posted in Air Force, American History, Veterans, World War Ii and tagged Citizen Soldiers, Desert Storm, Thank you for your service, The Greatest Generation, Veterans Day, Vietnam, Volunteer forces, WWII. Bookmark the permalink.

5 Responses to Thank you for your Service