Flying the F4 in the North – Alaska 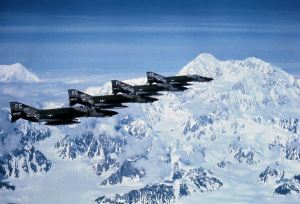 From 1974-1978 I flew intercepts of Soviet bombers off the coast of Alaska in the McDonnell Douglas F-4 Phantom II fighter.  I had arrived in Alaska fresh from a combat tour in Thailand, where I flew missions over Vietnam, Laos, and Cambodia. Flying in Alaska was very different, but more on that later .

The importance of Alaska to the defense of America, dated back to when the U.S. Army Air Corps sent Billy Mitchell there in 1901 to supervise the construction of the Washington- Alaska telegraph system. From this Mitchell came to appreciate strategic importance of the territory. Over the 73 years since Mitchell, there had been a major buildup of military forces in the state. The Cold War engaged America and the U.S.S.R. around the world. They met also at the top of America.

When I arrived in 1974, the Air Force had Elmendorf Air Force Base in Anchorage, and Eielson in Fairbanks. Several remote air stations also served as forward operating bases including King Salmon on the Alaska Peninsula and Galena on the Yukon River, which surrounded the base and flooded sometimes causing evacuations.

Aircrews sat air defense alert at the three bases (Eielson, King Salmon, and Galena) Our home base was Elmendorf with crews rotating to the three facilities on a weekly basis where they sat alert twenty-four hours a day.

Flying in Alaska was a different challenge where cold was a deadly killer. To prepare for our missions there, we attended Arctic Survival outside Fairbanks in the interior. There the days were even shorter and survival training entailed three days living in the bush. My training took place in December when the average temperature was about 35-50 below zero. I quickly learned what it was like to be on the planet Mercury with one side of me facing a fire – warm and the other side away freezing. We built snow shelters, which basically entailed covering boughs of fir trees with snow, and cocooning oneself inside a snow coffin. In the interior – not for the claustrophobic – the temperature rose to about 25-30 F from your body heat.

About twice a month the average crew member could expect to “sit” alert at one of the three remote sites for a week at a time. There were always 6 aircraft on alert — two at each site. Alert could be very boring as the air crews could not leave the facility and were expected to launch within 5 minutes of receiving a scramble order. To wile away the time, crews watched movies, many, many movies. There was also some old TV on the AFRN network, Kung Fu, M*A*S*H*, Sanford and Son, and other gems from the 1970s, and for the new guys – a proper initiation.

The new guys were always called FNGs – the F is self explanatory (every Air Force flying unit used this term to refer to new members). They were subjected to the type of military hazing that has gone on since time immemorial. In our case, it was not uncommon to hide the boots of a sleeping FNG and then blow the scramble Klaxon.  All this was done to test not only his to test mettle but to see how he fit into the squadron pecking order. Make no mistake every flying unit had and has a pecking order — Tom Wolfe talked about it in “The Right Stuff.”

In  Anchorage, the summer days went from about 3:30 a.m. until 11 p.m. when dusk would begin to fall. Summer flying was the best. Our training missions were often conducted near Denali National Park. One summer we were flying a four-ship formation near Mt. McKinley, when we flew over the summit there was a climbing party on the peak. They were very excited to see us and waved, probably thinking the Air Force had scrambled our flights to honor their arrival on the summit. It was a nice thought but we were running air intercept training to prepare for the Russians who tested our defenses off the Alaskan coasts.

In 1976, ten soviet aircraft were intercepted alone. An average flying year in Alaska could total as many as 5,000 sorties. It was challenging and probably the best flying I ever engaged in.

My departure in 1978 would end my time in the Phantom as I headed off to teach at the Air Force Academy, but that is a story for another time.

13 Responses to Flying the F4 in the North – Alaska