Every year Santa came until 2015

Each year I share this story of my good Air Force friend who sent me a Christmas card as a joke and we sent it back and forth until he died in 2015, for 44 years.

Since 1971, Santa Claus has come to my house.   That was the first year that a 12 inch-tall standup Christmas card of Santa, holding a pipe with a heart applique in the billowing smoke, arrived in the mail. It was sent by some close friends that I had worked with as an Air Force lieutenant in Washington, D.C. 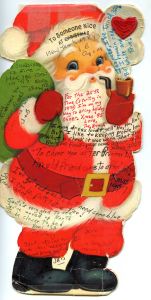 Now I was a Captain in flying training in California, with likelihood of being in combat soon and the stresses that the Vietnam War had placed in my path.   Then Santa arrived with this cheerful greeting:

“If Santa loaded up his sleigh and found room inside,
For someone who’s been nice all year to take a Christmas Ride.
He wouldn’t have to check his list or think it over twice –
He’s just say, ‘I’ll take Johnny ! Because you’re so EXTRA nice!’”

with the engaging postscript: “Show…

John E. Norvell is a retired Air Force Lt Colonel, decorated air combat veteran of the Vietnam War, and former Assistant Professor of American and Military History at the U.S. Air Force Academy. He has written freelance for the Washington Post, the Middle Tennessee Journal of Genealogy and History, and for several newspapers around the country.
View all posts by jenorv →
This entry was posted in American History. Bookmark the permalink.