The First Time I flew the F4

In the fall of 1972, I arrived at Luke AFB to upgrade to the backseat of the F4. I had come to this point late in life, 28 and a captain, having been a ground pounder (non-rated or non-flying officer)  for first 4 years of my career,  then going to Navigator training. I had always wanted to fly jets when I was a kid so when I was selected to fly the F-4, after nav school, it was a dream come true.

The F4 Phantom II was the primary Air Force fighter of the Vietnam War. It had entered the inventory in 1960, so in 1972 it was relatively new. It was not a small fighter, it had two big GE J 79 engines that could blast it off the deck and the bird could weigh in at nearly 60,000 lbs when fully loaded with fuel at take-off. When the afterburners were cooking, the thrust was its biggest advantage, it could push you out there away from an enemy or help you engage him in combat.

Training began at Luke with ground school. There I learned the aircraft systems, practiced emergency procedures, and spent about a month in training before I even got to fly “Big Ugly,” as we affectionately called the bird. As a WSO (Weapons Systems Officer) you don’t fly in an F4 — You Wear it. The cockpit was very small and so tight I could hardly move. I had on a G Suit to handle increased G forces, an oxygen mask, and was tightly strapped to a rocket ejection seat.

Which brings me finally back my first flight.

Our bird, F-4C 662, requested permission to taxi out of its parking space and slowly moved into position.  While Hollywood has accustomed Americans to think that there is a lot of banter between aircrew members, in actuality there is usually strict radio discipline. In the back seat I finished my checklists as the AC got permission to take off. I wasn’t excited or even nervous – actually I really didn’t know what to expect – just did what I was trained to do.

Now on the runway, the AC/IP pushed the throttles which had been idling in what was called “Military Power,” past the detente into afterburner, and released the brakes. The Phantom jumped off the runway. There is no other way to describe it. It was like being shot out of a cannon strapped to the shell. In the back, I called off 100 kts as we passed that speed and began to rapidly lift off.

All by the book.

Once in the training area, the AC put the big bird through its paces, I practiced with the radar, and we accomplished our training objectives. Then, the AC told me “You’ve got The Stick.” And I shook the stick, “Saying I’ve got The Stick.” 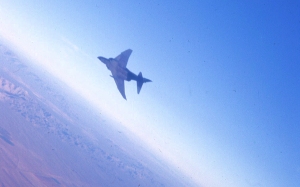 Here I was a kid from a rural small town with my hands on the stick of a top-level Air Force fighter.  Its hard to put into words my feelings of that moment, now 45 years later. It was mixture of pride, awe, excitement, and an extreme adrenaline rush that lasted well into the night (as my wife can still attest).

Over my years in the Phantom I would have The Stick on almost every mission. I would fly combat missions in South East Asia, see sights of amazing beauty in the air, and do things in the air that most folks can not dream of. And I would be changed in many ways.

Yet that first time that will be always the most special.

10 Responses to The First Time I flew the F4