My grandfather was a remarkable man.  But he almost met his match and burned down the house when he decided to wire it himself in the 1930s. 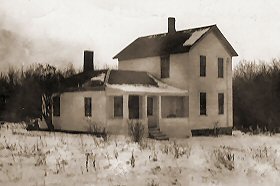 I defer to his own words on this:

“When I bought the house there wasn’t any electricity. I had to wire it up.  My brother Leo had a friend, and he and I got to be good friends.  The friend, “I’ll wire the house for you, I’m an electrician and I’ve got lots of extra stuff. Maybe we’ll have enough.”

I said, “Fine, if you’ve got enough for the downstairs. When can you do it?” He said “I’ll be here tomorrow night.” He worked until about 10 o’clock and I was around watching him. But he really only had enough materials to start the job and couldn’t get back to it for a while, as he had other paying jobs to do.

But I kept blowing fuses.  I can’t remember how many wires I ran out of that box.   Vi [his wife] said to me, “Eddie you are going to burn down the house.  There are sparks coming from the outlet.”  I ran over and pulled out about six plugs we had connected there.  Nothing happened, but I almost burned down the house.

Of course electricity wasn’t used for everything.

We had a gasoline-powered washing machine. I paid about $185 for it. In those days, people didn’t wash clothing every day, just once a week and you had a lot to do. Well, the gas engine wouldn’t run; most of the time it was a problem with the sparkplug since you had only one. The dealer told me if I had any problems to let him know, but he was too busy to come. So that’s how I found out it was the sparkplug–but when we got electricity we got an electric washer.”

When they got electricity it really brought them into the modern age.   Most rural areas didn’t have electricity.   But that wasn’t the only thing.  There was no indoor plumbing, except for a pump in the kitchen.   All the water had to be heated on the stove.  In fact they didn’t have  indoor plumbing until 1953 and used an outhouse and chamber pots in the winter.  The year I lived with them when my father was overseas in the Korean War was the first year that we didn’t have to use the Privy, as I have mentioned before.

Most people  now in the second decade of the 21st Century  have  no concept of what rural life was like back then.   Farm life was tough, no doubt about it.  Ask anyone who has used an outhouse in the winter.

John E. Norvell is a retired Air Force Lt Colonel, decorated air combat veteran of the Vietnam War, and former Assistant Professor of American and Military History at the U.S. Air Force Academy. He has written freelance for the Washington Post, the Middle Tennessee Journal of Genealogy and History, and for several newspapers around the country.
View all posts by jenorv →
This entry was posted in Family History and tagged Electrification in the 1930s, Home rep, Home repairs, Rural life. Bookmark the permalink.