In 1952 my father was ordered overseas during the Korean War.
At the time, we lived in Troy, New York, where I was born, and where my father was in the Army at the Watervliet Arsenal. 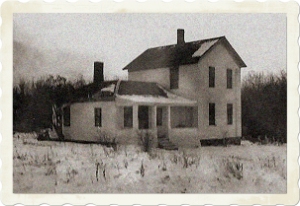 With my father’s impending move,  my parents decided it was best that the family relocate to upstate New York and live with my grandparents on their small farm.
I had never lived on a farm before and it really was an amazing place for a small child.  My grandfather had cows, pigs, and chickens.  Today kids live on farms, but my farm experience was different.  I  went to a one-room school and used an outhouse.

First the one-room school and then the other — perhaps– less delicate story.

The small one-room school contained kids in grades 1-8.  There were at least one or two kids in each class and the older kids helped the younger one with reading and other subjects.  Each morning we gathered at the school, which is still there today in Dexterville, NY, and waited to be let in.  If it were winter, our teacher had to get there early and build a fire in the wood stove.

Then the day’s activities commenced.  My year there 1952-1953 was the last for this type of school in New York as centralized districts became the norm. But that year was special, and I think I never got to know a teacher as well as I did Mrs. Cosgrove.

If going to the the school was a pleasant experience, using the outhouse often was not.  When we arrived at my grandparents farm in the winter of 1952 it was, like many of those in rural areas at this time, without indoor plumbing.   Located behind the house about 30 feet from the back door was the privy.

Now we really didn’t use it much in the winter. First of all, it was much too snowy in that part of New York to brave it.  Secondly, my grandmother had chamber pots in the bedrooms for nighttime use.

I really don’t remember using them, as I must have, but I do remember seeing them.

When the warm weather returned in the spring we did use the outhouse.  This wasn’t too bad at first. But when it got hot it became a trial to use it.   It smelled and to add to the misery there were mosquitoes,flies, and spiders and occasionally snakes — which my grandmother was deadly afraid of.  Which, of course, brings me to the time I locked my grandmother in the outhouse.

I am not sure what motivated me to do so other than I was an “active” child.  I remember going up to the door while she was inside and turning the piece of wood that effectively locked the door from the outside and then hiding to see what happened.   When she finished her business she went to leave.  To her dismay the door wouldn’t budge.  I could hear her yelling my grandfather’s name: “Eddie, Eddie, Eddie.”

The outhouse was there for a few more years — one other time I locked my cousin Patty in  it, for a joke, which she too didn’t appreciate — and then it was gone.

Where it had been, my grandmother planted a flower garden.

Its said that on that spot the best flowers grew.

John E. Norvell is a retired Air Force Lt Colonel, decorated air combat veteran of the Vietnam War, and former Assistant Professor of American and Military History at the U.S. Air Force Academy. He has written freelance for the Washington Post, the Middle Tennessee Journal of Genealogy and History, and for several newspapers around the country.
View all posts by jenorv →
This entry was posted in American History, New York, New York State History and tagged One room school, Outhouses, Privy, Rural, Rural life, Upstate NY. Bookmark the permalink.