Watch out for the flying Bucket of Water

Each spring in Thailand, there is a festival called Songkran.

This is the traditional Thai water festival celebrated with the Thai new year in April.

According to Wikipedia:   The Songkran celebration represents purification and the washing away all of their sins and bad luck.  As a way to show respect, younger people often practice water pouring over the palms of elders’ hands. On the same occasion, paying reverence to ancestors is also an important part of Songkran tradition. 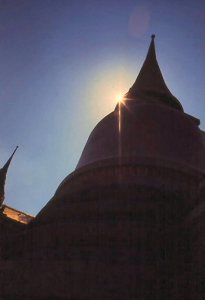 However, in modern times, the ritual splashing of water had evolved into water fights. Celebrants, young or old, participated in this tradition by splashing water on each other.

Thais had the habit of sneaking up on you and dousing you with a bucket of water.  This was not a light splash.  It didn’t matter if you had just landed and wearing all your flight gear, you had to watch yourself and remind the merry makers it was “Number 10,” very bad,  to throw water on someone who was coming back from a flight.

Being a fighter wing, it didn’t take long for the jocks to get into the spirit of the thing. Elaborate practical jokes were played involving water.  But the granddaddy of them all occurred when I was there in April 1974.  And like so many things, which began at Happy Hour in the bar, it probably seemed like a good idea at the time.

Happy hour had a way of beginning for some folks at about 5 and lasting well into the night, when they were indeed very happy.

During Songkran 1974, someone got the idea to fill a large trash can with water and prop it up against the door leading into the bar at the officers club.  The idea was to balance it so that when the door was opened outward, the can would fall and inundate the unwitting dupe who had opened the door.

Now this plan might have worked out ok if anyone had bothered to watch the door just in case the wrong person opened it — say a General.

I can tell you know already who opened the door.    And was doused with a lot of water and was not amused.   Perhaps he didn’t appreciate being ritually cleansed; perhaps he didn’t respect Thai Traditions; perhaps he wasn’t all that Happy at about 9:30 at night to be wet all over.   We will never know.

But the operative word was NOT HAPPY.

Well if you can’t take a joke, you shouldn’t be in a strange foreign land surrounded with people who dump water on you.

And that as far as I know ended US Air Force involvement in Songkran at Udorn Royal Thai Air Force base for all time. 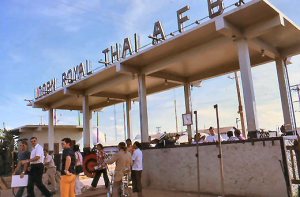 1 Response to Watch out for the flying Bucket of Water