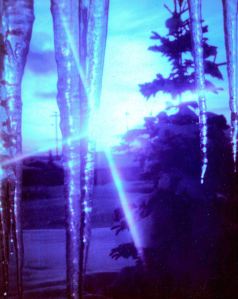 In Alaska it was a challenge to drive in the winter.   Although snow was not a major issue in Anchorage, cold weather often was the downfall of many vehicles.

40 years ago, long before it became common in the “lower 48,” many vehicles in Alaska had engine block heaters.   We were lucky as we had a garage at our home.  Most folks on the base plugged their cars in at night so that they would start.  For the most part, it seldom got below -2o F in Anchorage where we lived.  Fairbanks was another story.

One of our remote sites was at Eielson Air Force Base, near Fairbanks in the interior of Alaska.  In the winter, the temperature could drop below -40F and sometimes hovered near -50.   This made for many challenges to the novice Alaskan driver.

One problem, seldom encountered in the lower 48 was frozen tires.  It was not uncommon for a new Alaskan driver to get in his car, finally get it started, and literally drive off the rims as the tires were so brittle that they simply disintegrated.   We were warned about this during newcomer orientation.  Another challenge was warming the car sufficiently.

Once while sitting alert this was taken to extremes by one of the sergeants who manned our combat alert center (CAC) with more than disastrous results.

Our CAC  was located in the hangar that housed the alert F4s on the far side of the base.   Since this was an active aircraft hangar there were very large portable heater units that pumped out forced heat to warm the hangar and keep the F4s warm so that there wouldn’t be any hydraulic and oil leak problems.  These F4s were always on alert status, which meant that they had to be launched as quickly as possible to intercept Russian aircraft. Hence the necessity of having them warm and ready to go.

Our intrepid sergeant one particularly cold night decided to take one of the portable heater units and run the hose from it out into his car to warm it.

Unbeknownst  to him the unit did not put out 80 or 90 degrees of heat, but several hundred BTU s.   He ran the hose to his VW bug, pushed it into the interior and fired the heater up.  Then he went back upstairs to the CAC while it warmed.

After about 20 minutes he went back to the car and discovered to his dismay that he had literally melted all the plastic in the interior.

His problems were only beginning, as had misappropriated government property to warm the car and we could only imagine him explaining it to his boss, the insurance company, and of course his wife.

Nobody said that living in Alaska was easy.