4th of July long ago

More than anything else, the holidays we celebrated together demonstrated and defined our sense of community. In our little town of Hannibal New York, each holiday had its own special rituals and observances, this was especially true of the 4th of July.  I had not thought much about family and family traditions. Most children don’t, you just do what your parents do, never realizing how much had been passed down from one generation to the next.

The 4th of July was a big occasion and as such merited a parade. Since I was a Boy Scout I always marched in these parades, some years carrying the US flag, other just in the ranks. As marchers we were a motley crew, all different shapes and sizes, some with uniforms, most without and seldom in step; which now strikes me as also true of the adult leaders, but we seemed to fit in nicely with the rest of the parade.

The parade usually formed the school, marched down Cayuga Street, around the town square and sometimes down Fulton Street or back up Auburn Street to the school. The Hannibal Central School band led the parade. George Tripp, the director, had molded the varying degrees of talent into a remarkably good marching ensemble. Following the band came the scouts, some floats pulled by tractors, some kids on colorfully decorated bicycles that invariably won the rider honorable mention. Finally, the town firetruck brought up the read blowing their sirens, as the firemen threw out candy to the kids along the curbs. 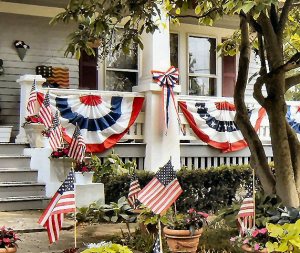 4th of July at our home today

One year, 1960, the parade marked the centennial of the founding of Hannibal and was particularly a big deal with two or three times the usual number of participants from all over the area. The Hannibal Centennial was not only celebrated with a parade, but also with fireworks.  Finally, a time capsule was buried in the town square to be opened in 100 years. Alas, now since most of the beautiful, old square is gone, the time capsule is probably buried under pavement.

These events seemed to bring out everybody, which surprised me as every parade was always the same. I was a teenager and found this amusing. People would come early to get a seat, often bringing lawn chairs or sitting on the top of cars. I couldn’t understand why, as the parade would last all of five minutes.

Now I realize that these events were the cement that held our small town together. People came not only to watch the parade or the band concerts and plays at the school, but also to see each other and be seen– to gossip, to talk, to inquire about family and friends, and to let their neighbors know that they cared about them.