Lipscomb Norvell and the Seige of Charleston

The Siege of Charleston  in 1780, during the American Revolution,  marked a British shift of focus towards southern colonies. 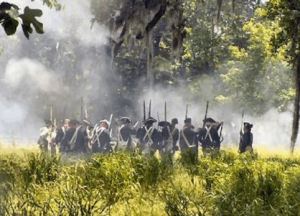 After failing to achieve any advantage in the north, in 1779 the British government sent a combined military and naval expedition of 7,600 strong under General Henry Clinton by sea to South Carolina.

Charleston was the first objective of the attack. This worried the Continental Congress which was concerned that the British could establish another strong base, similar to Savannah, in  the South. In response to the pending threat to the city, Continental forces were moved south.

From Virginia, 700 men were reassigned to defend Charleston. It was in this group, that Lipscomb Norvell now found himself. Congress put the local commander, Major-General Benjamin Lincoln, under severe pressure to retain the city.

But the British crossed the Ashley River at Drayton’s Landing, twelve miles above Charleston, without any opposition. This gave them control of the land routes to Charleston. April1780 marked the beginning of the siege-proper when the British forces outside Charleston began to dig siege trenches. As the siege tightened, American morale plummeted.

On April 21, General Lincoln made his first surrender offer – he would abandon Charleston if the army could leave intact. The siege was again tightened. On April 29, Fort Moultrie on Sullivan’s Island guarding the northern entrance to the Harbor fell to a British assault. Lincoln made another offer – surrender with full honors of war for the army, with the militia allowed to leave. This too was rejected.

Lincoln, now under constant pressure from the civilian population of Charleston to end the siege, surrendered on 12 May 1780. British General Clinton took 5,500 prisoners. Lipscomb Norvell was taken prisoner at Charleston on May 12, 1780 and remained there until the end of the War. The immediate aftermath of the capture of Charleston confirmed the most optimistic British expectations.

But this was a Pyrrhic victory at best. Much of South Carolina rushed to return to British allegiance, with a loyal address from Georgetown and a number of senior local politicians rushing to declare their loyalty. However, Clinton was soon to alienate many who would have been happy with a restoration of British authority by requiring active rather than passive support and the campaign in the Carolinas was eventually to bog down as partisan warfare erupted in the back country.

The defeat at Charleston was a disaster for American forces in the South.  It ranked as the Army’s third largest surrender behind the Fall of Bataan in 1942 and Harper’s Ferry in 1862 during the Civil War.

Lipscomb Norvell would survive his time as a POW and return to Virginia, where he would be an early settler on the Virginia and Kentucky frontier, father 12 children, and later die in Nashville, Tennessee in 1843.

John E. Norvell is a retired Air Force Lt Colonel, decorated air combat veteran of the Vietnam War, and former Assistant Professor of American and Military History at the U.S. Air Force Academy. He has written freelance for the Washington Post, the Middle Tennessee Journal of Genealogy and History, and for several newspapers around the country.
View all posts by jenorv →
This entry was posted in American History, Colonial History, Combat, Military history, Norvell Family History, Revolutionary War and tagged American Revolution, Charleston, SC, Seige of Charleston 1780. Bookmark the permalink.