Brigade reviewed by President (Mr. Lincoln) and George B. McClellan. I was appointed a captain and Assistant Adjutant General. Assigned to duty on the staff of Brig Gen. I. B. Richardson, commanding brigade (same) at his (Brig Gen R’s) request. 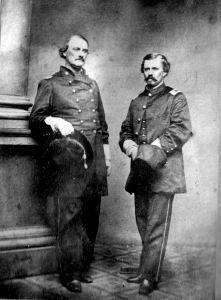 Marched to Alexandria, went into camp between Alexandria and Occoquan three (3) miles below Alexandria. The Brigade upon our arrival was assigned to Heintzelman’s Division.

Made two unaccompanied missions (both to Occoquan, Va). Had “small” skirmishes both times and some artillery dueling (loss insignificant).

Was assigned to First Division, Second Army Corps, Army of the Potomac, General I. B. Richardson commanding.

Joined the Division at or near Centreville, Va..

Followed up the Confederate Army of Virginia (which had just evacuated Manassas) to the Rappahannock River – had skirmish at the river, only Howard’s 2nd Brigade engaged (loss small). Countermarched and returned to Alexandria, Va., after seeing the Reb Army across the Rappahannock on its way to Richmond, Va.

Embarked the Division for Fortress Monroe (sealed orders to be opened upon our arrival there). Headquarters Division and Meagher’s Irish Brigade took passage on the steamer Ocean Queen.

[The “Irish Brigade” of Irish-Americans was led by Thomas Francis Meagher, who was remembered for recruiting and leading this unit in the Civil War. ]

From Wikipedia
Map by Hal Jespersen,

Arrived. Upon arrival at Fortress Monroe Va., reported to General Wool, who was in command and complied with sealed orders.

[ John Ellis Wool (1784-1869) commanded Fortress Monroe, Virginia, having secured it for the Union during the early days of the war. The fort guarded the entrance to Chesapeake Bay and served as the principal supply depot of Maj. Gen. George B. McClellan’s Peninsula Campaign.]

Ordered by him (Gen Wool) to proceed to Yorktown, Va., and disembark Division and go into position preparatory for participating in the Siege of Yorktown.

Took part in the Siege of Yorktown Arsenal. Enemy evacuated the night of May 3rd.

[ In April 1862, General George B. McClellan initiated a plan to retake Yorktown Arsenal. At Fort Monroe McClellan had amassed more than 100,000 troops. Norvell’s unit appears to be part of these forces which would lay siege to the arsenal. Despite C.S.A. fire, McClellan’s troops slowly advanced. Around midnight of May 3, the C.S.A. guns ceased. On May 4, 1861, the Union army discovered the arsenal abandoned. Yorktown remained in Union control for the rest of the war and was maintained as a military garrison until the summer of 1864. ]

Took part in the evening in the fight at Williamsburg, Va., when the enemy made a stand under the command of General John Magruder.

[The Confederate withdrawal from the arsenal was well planned and executed. A mile east of Williamsburg, General John Magruder built another fortified line. On the afternoon of May 4, the Battle of Williamsburg began, lasting into the next day. Confederate casualties for the battle were 1,600, while Union losses were 2,300.]