Sliding on the Ice II

In 2007 we returned to a very different Alaska than the one we had left 30 years earlier.  In many ways, Anchorage had the same old small town feeling, but now it was a large city with much more traffic.  The Chugach mountainsides that we saw from our home were now dotted with houses.  Many more people lived there, including a large Samoan community, according to our old neighbors.  In fact many more of the Native Peoples lived in Anchorage than when we were first there.

We had planned to visit many of the sites that we had gone to when we first lived there.  The weather, however, had other plans.  We had forgotten that summers in Alaska can be very rainy and cool.  When we lived there we didn’t really notice it, but the week of our visit it rained every day and was gray, foggy, and cool despite the fact that we were there in July.  (As an aside tourists come to Anchorage in the summer and never see the sun.  Along those lines.  Mt. McKinley, which can be seen from Anchorage about 125 miles away on the horizon, can not be viewed in Denali National Park on many days due to low clouds and fog.)

The sun finally burned off the fog about 10 p.m., which of course was about 1 hour before it set.  So we decided not to drive to the Matanuska Glacier, about 120 miles away and only visit the Portage Glacier, where we had climbed on the ice. 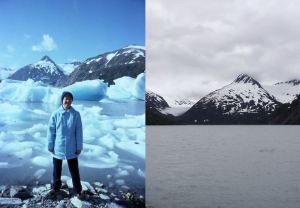 It was another gray day when we drove down and the first thing we noticed was that there were no icebergs.

Over the past 30 years the glacier had retreated far into the distance, so that the only way to see it was by excursion boat.    The guide told us that the glacier advanced by about 5 feet per year, but was now retreating at the rate of 20 feet per year.

Would we go back to Alaska again.  No.

Our time there 40 years ago was a very special experience.   They say you can never go home again, and that is true.

Still we did find our old friends to be the same wonderful, warm neighbors we had known so long ago.  That was the highlight of our visit.   They were our tie to an Alaska that exists now only as a very fond memory.   In that memory Anchorage still is a small town, and we still find ourselves climbing and sliding on the ice.

For more comments on earthquakes that we experienced in Alaska see