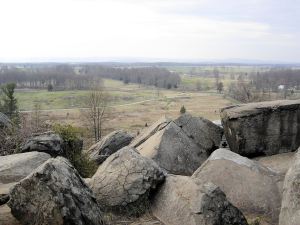 View of the Battlefield from Little Round Top

My focus on Gettysburg this fall has brought to mind, especially at this time of year, the many stories that say the battlefield is haunted.

Almost from the days after the battle, there have been reports of  the supernatural.  From phantom cries of wounded soldiers to ghost-like apparitions, the place has had an unearthly reputation.

For the men who fought there, the nights of the three-day battle must have been  like something out of hell,  with the cries of the dying and wounded echoing in their ears.  Nearly 5,000 horses and more than 50,000 men lay dead, dying, or wounded.

The Union dead soldiers were later removed to proper burial sites, some in their home states and many to the new national cemetery. But what of the Confederates? Many soldiers never received a proper burial. Their remains, buried in shallow graves, continued to appear for many years when heavy rains washed away the shallow soil over them.  Even now, in broad daylight, there is an eerie quality about the place.  One cannot help but see in the mind’s eye the warriors here  forever locked in combat on this hallowed ground.

This is not the first place that I have felt an unexplained presence.

While on R&R during the Vietnam War, my wife and I visited the Arizona Memorial at Pearl Harbor. Like Gettysburg there is something about the place that is hard to pin down. Whether it is the sense of the history of the place, or the knowledge that in the case of the Arizona Memorial, it contains the remains of those who gave their lives for freedom, the moment I stepped foot on it, I felt something.  It was and is something hard to put into words.

The December 7, 1941attack, explosion, and fire killed 1,177 sailors and marines instantly.  Only 334  of the 1500 man crew survived.  While some bodies were recovered, many located in the rear of the ship were left there due to their condition.  From the memorial’s deck  one can see, down into the water, the ghostly outline of the ship, still leaking oil after all these years.   Something tragic had happened there and  it still animates the place.

One other place with something akin to this  feeling is Lincoln’s tomb in Springfield, Illinois.

Lincoln, our first martyred president, is buried in an imposing tomb in Oak Ridge Cemetery in Springfield. That his presence would be strongly felt there so many years after his death is not surprising.  Lincoln is considered our greatest president and while living in Washington DC, I have seen visitors to his memorial brought to tears, so strong is his emotional link to the American people.

Before his death, he told many in his cabinet that he had a premonition of his death. When he was first buried, an attempt was made to steal the body.  It was subsequently hidden. When the tombwas rebuilt in 1901, due to water and other damage, the caskets of Mr. Lincoln and Mary Todd Lincoln were finally put to rest under concrete to prevent any future attempts.

Still there is something about the tomb, much like the feelings at Gettysburg, and the Arizona, that pervades it.

Some say that it is the great grief  for the tragic events that reverberates across the years.

And that perhaps is the best explanation of all.