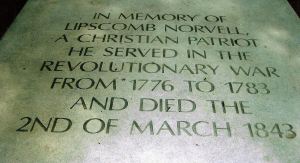 In teaching a course on Gettysburg this fall, I have come to think a lot about the citizen soldier.

Several generations of the Norvells in my family served our nation, many finding themselves in the front lines:

— Lipscomb Norvell in the Revolutionary War

—  Freeman and Spencer Norvell in the Mexican War

— and of  course in Vietnam.

Their service was brought home even more when I visited Lt. Lipscomb Norvell’s grave recently in the City Cemetery in Nashville.   If there were ever a hero in a family of service men, it was Lipscomb.  He served for seven years in the Revolutionary Army, was taken prisoner by the British in 1780 and survived to return home and helped to settle the American frontier.   His grave says he was a Christian Patriot.

They were all patriots who served their nation — As are the young men and women on the front lines today in Afghanistan and Iraq.

All speak to the great tradition of the Citizen Soldier in America.

Many see in George Washington, considered the modern Cincinnatus of his time, as the model for Citizen Soldiers.

Cincinnatus was a Roman general who took up arms in defense of Rome and then returned to his home to become a citizen of his community again.   In the early United States this idea formed the basis of the militias who were called to arms during the Revolutionary War and the Volunteer brigades called up in the Civil War.    It was the main reason why the United States relied upon its citizens to do their duty when needed and continues to rely on them in today’s state national guard units.

All these Norvells, and many others, took up arms to serve our nation; some did not return, all of those above did.  Sometimes the return was greeted with great thanks for their service as in World War II, sometimes as in Vietnam it was not.   Yet that did not matter to these men, they served because it was their duty as a citizen to give back a part of their lives and abilities to this country which had given them so much.   This may seem to some like a very old-fashioned notion:   That to those who are given much, it is expected that they will give back in return.  It is not.

It is the basis of how this country has worked and should work.  And it is not limited to the military, it is the basis of the Peace Corps, community and church-related services, the Salvation Army, the Red Cross, and countless other groups, such as the ones who restored the City Cemetery in Nashville, and those who work for the greater good in the world.  It is a very American idea in a world where selfishness not selflessness is often the way of life.

The men and woman who served, and serve today, did not do it for parades, or discounts at stores, they did it for something much bigger:  a calling to serve that they heard.  That is the bottom line, it is something that draws a man out of himself to be a bigger person, to do his duty, to fill the breach, and in the end return to his home to again give back to others there as if nothing had happened.

Indeed the very definition of a Citizen Soldier and a good American.