At the Fair – Two Generations

Nearly 50 years ago I went to the New York Worlds Fair.

Nearly 75 years ago,  my father went to the New York World’s Fair of that era.

In June 1939 the biggest event in the country was the visit of their majesties King George VI and Queen Elizabeth to the Fair and my father was determined to be part of it. At the time he was in the US Army stationed in the Boston area and it was just a short trip by train to New York. He did not make a great deal of money in the Army so a visit to the Fair was clearly a luxury to him (His ticket book to the fair cost $2.50, which is approximately $40.00 in 2014 dollars.) But, as he said later, “This was something important and I knew I had to be part of it.”   It would be 1940 before he was able to attend,  but that didn’t matter he was at the Fair. 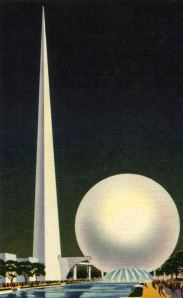 A postcard image of the Trylon and Perisphere from ca 1939

Inside the Perisphere was “Democracity” a model city of the future– which would house more than 1,000,000 people. All this “world of tomorrow” was set 20 years in the future in 1960, something that was not lost on me 25 years later when I attended another New York World’s Fair in 1965.

In 1964-65, New York again hosted a World’s Fair. The theme symbol was the “Unisphere,” a 12 story high stainless steel globe which represented the idea of a unified world and the high goals of peace through understanding. 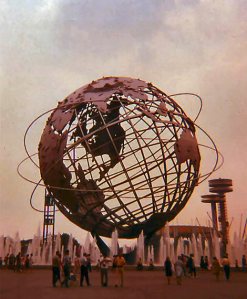 In the intervening years between the two fairs, the country had been plunged into a Second World War, and my father saw combat in the pacific, ultimately making the army a career and retiring as a Master Sergeant. The high ideals of 1939 for a World of Tomorrow had been swept away when Germany invaded Poland in the fall of 1939.

The 1964-65 exposition was more linked to the past than the future to come in America. It was a glossy and shiny show which highlighted the business of America, which was in the 1950s-early 1960s – as they said in an earlier era – business. As the fair closed, the country would be increasingly embroiled in Vietnam, and like my father, I would, a generation later, find myself flying combat missions over Vietnam.

I don’t know if my father ever returned to Flushing to the fair site. The Trylon and Perisphere were demolished. The steel was used for war purposes. The World of Tomorrow so bravely forecast in 1939, was far different in 1945.

In 1969, while visiting friends I drove to Flushing and wandered the now empty grounds. Only a few structures remained: the US Pavilion – deserted and decaying – once planned to be a New York city public school after the fair, the NY State pavilion – with its towers later immortalized in the film “Men in Black,” and the Unisphere, forlorn in its stagnant pool.

The two fairs in many ways were metaphors for the America of their time. The planners hoped for a brighter future, the fairs reflected not the future, only the America that they knew. In the end each fair showcased a country and an era that was ending. There was no way they could see what was coming to pass.