Halloween in a small town

My father Phil Keith Norvell loved Halloween.  One of my earliest memories is of him carving a huge Jack O’Lantern about 1948.

Growing up in rural upstate New York, Halloween was the biggest holiday of the year.  A small town with old brooding houses, bridges over winding creeks, and old cemeteries full of worn and leaning stones is the perfect setting for Halloween.  Late in the day, as the leaves fell from the trees, the sun would sink low on the horizon bringing the kind of special fall light that sharply etches everything in contrast.  All day long kids would celebrate at school with treats and games.  Even the teachers dressed up.  Costumes for the most part were homemade, there were no big parades of zombies or movie characters, but usually just pirates, clowns, witches, and some small hobos.  If you were lucky your class might go on a hayride or have a haunted house where you handled disgusting body parts made from corn, grapes, and spaghetti. As evening fell small bands of kids would appear from all over town ready for the main event: trick or treating.  Getting the treat was important, but the tricks also came into play.

The smaller children pretty much limited their mischief to soaping the windows of those who were not home, but the teenagers really knew how to celebrate the holiday.  The high school principal would find his mailbox filled with rotten tomatoes.  Pumpkins would be heaved onto lawns as if the Headless Horseman had just made a home delivery.  Sometimes a body, carefully constructed from old clothes and stuffed with straw, would swing in the trees vainly hoping to catch your attention.  Every year something new would be hoisted up the flagpole in the village square.  One year it was a wagon, the next an outhouse.  This generally occurred after the smaller children had gone home.  The next morning they would see it from the windows of their busses on the way to school.  Nobody ever knew who had done it.

When the evening was over you would go home, count your loot, and eat what you wanted without a worry that someone had tampered with it.

Thus, was Halloween celebrated in the small towns of New York. 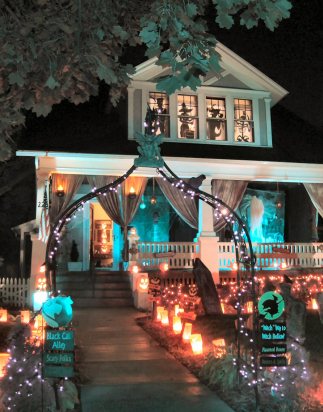 Today our home this time of year is known locallyin Canandaigua New York as the “Halloween House.”

In 2008 the Halloween house was on TV, click here to see a video

1 Response to Halloween in a small town