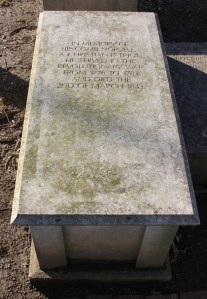 LIPSCOMB NORVELL (born, Hanover County, Virginia, September 1756 -died in Nashville, Tennessee March 2, 1843) entered the Continental Army on August 7, 1777. He
fought in the Battles of Brandywine, Trenton, and Monmouth. He was taken prisoner by the British in Charleston, South Carolina on May 12, 1780 and remained in British custody until the end of the war. From his service, he was an original member of the Virginia Society of the Cincinnati. An original settler in Kentucky, he was a justice of the peace and a farmer. By 1828, he was living with his family in Nashville, where he remained until his death in 1843. His son was U.S. Senator John Norvell of Michigan and his grandson was William Walker, the American Soldier of fortune who became Dictator of Nicaragua in 1857, the son of Mary Norvell Walker.

Served to close of war as POW of the British in Charleston, South Carolina.